Value One: An Office to Caress

A visit to new Tribüne 2 office spaces at the Krieau harness racing track.

When we started cooperating with the real estate developer Value One in 2016, the priorities were clear. This client was expecting something unique and attached great importance to details. We took this as an invitation to challenge the Value One team in a positive way. After all, the task was to develop a master plan for the company’s strategic direction and then translate it into core organizational processes and a new spatial concept.

Six years later, we at theLivingCore feel confident that we have achieved much together. The international orientation of Value One is progressing, the group’s companies are working together in a more integrated way, and the renovated Grandstands 2 and 3 at Krieau can be described as the highlight of successful strategic positioning.

After the opening of Grandstand 2 in 2020, we wanted to let some time pass before visiting the new office spaces. In the weeks following such an opening, there is always great hype and much praise. However, whether an office really works for people and moves the company forward can only be determined after some time. Thus, in July 2022, we visited Sabine Müller, our main point of contact during the project.

It may sound banal, but even arriving at the garage was special: clear markings, plenty of space, short distances, and brightness are things sorely missed elsewhere – here they come with implicitness. I leave the cars behind me and walk along the trotting track towards Grandstands 2 and 3. I watch the horse-drawn carriages making their rounds on the trotting track as they do every day, listen to the quiet of the Grüner Prater, and perceive the mix of big-city buildings, housing, and working within the greenery as quite successful.

The grandstands seem almost like an entrance gate to the forest. When you enter, your eyes immediately roam toward the sky through a colorful roof that casts a play of light on the ground. “It’s based on a hot air balloon,” says Sabine Müller, who manages the Innovation and Development department at Value One and welcomes us in the entrance hall.

In general, the entire building is filled with stories about the trotting track, the former hunting grounds of the Austrian emperor, as well as about Value One’s own history and ambition, namely to create something special and bring beauty to a city.

And beautiful it is. Have you ever been in a building that you wanted to caress permanently? We found ourselves doing something that we thought we would never do. We were in the restroom – stroking the walls. Do you think that’s odd? Please, visit the Value One office building and go to the toilets there. Then you will understand.

Love, embedded in every smallest detail, runs through the entire office space. In one of the meeting rooms, we met Heide Schicht, the project manager who helped plan the building through all the smallest details over the years.

It is quite an art to design meeting rooms functionally while giving them a “soul” and personality. It needs more than stereotypically painting “Creative Space” or “Open Minds” on the doors. You need to proceed more subtly: different surfaces such as wood-paneled walls, heavy doors, and special carpets; every room looks different, but everything fits together – like “pralines in a box of chocolates,” Sabine Müller says.

Of course, I am particularly pleased when she remarks: “We can still feel your touch here.” What does she mean by that? For example, the room concept we worked out was adopted both functionally and aesthetically, and the design guidelines were implemented in a later collaboration with Marcel Wanders. Besides that, some of our naming for the individual zones was adopted too.

However, the most valuable for us as theLivingCore is that the organizational changes we proposed and developed together with the employees are reflected in the spatial constellations.

About two hundred people now work at Value One, even though the new office is designed for hundred and forty people. This shows us another aspect of our work that has taken off – promoting a new way of working that aims at project-oriented, self-organized work in teams.

What sounds familiar and well-known because of the experiences with COVID-19 was far from reality six years ago. Remote working, flexible working places, and trust in the employees’ ability to organize their work productively and meaningfully together.

Sabine Müller says: “We are all in the home office about two to three days a week. COVID-19 has made a big difference here. We also have many areas throughout the building where people can sit down without fuss – indoors and outdoors.”

One such outdoor area has particularly stuck in my mind: if you step out of the ground floor towards the Grüner Prater, you find yourself on the terrace next to an artificially made pond. A bridge leads over it, and after a short walk across the meadow, you reach another outdoor area modeled after an aviary.

Towards the end of our meeting, one question remains: “The shell and interior of the grandstand are incredible, but how do the people who work here live the “spirit” that Value One conveys so impressively through its new building?” Sabine Müller says: “It is a challenge not to stop at the “happiness office.” We want to be a place where employees can live their purpose in harmony with the company’s purpose. The question of how we can do that even better is definitely occupying us as an employer.”

It is a very challenging question – especially in a world that is determined by complex events and confronts many people with the question, “How do I want to work?”. Many leaders have been asking us how to deal with this ever-changing nature of the post-pandemic world. And you can find many of the answers in our new book, The Enjoyable Company, available for download here. 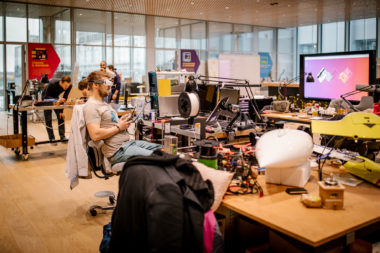 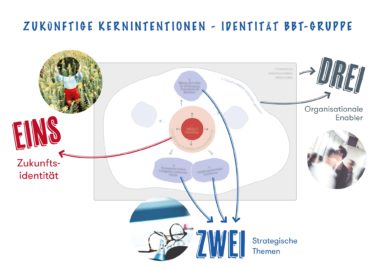 What is the purpose of BBT-Group?